Through all of the ups and downs we always manage to do great things during those upticks and this was certainly one of them. Dad got to take his little girl to her first baseball game and it was thrilling. It was not your ordinary baseball experience. We arrived 2 hours early and were invited to stand on the warning track in right center field for both teams pre-game practice. The giants took the field first for practice and I was very interested in watching that but Ollie was hungry and there was a giant spread of all of the free food, drink and junk she could get her hands on so we spent the entire Giants warm up inside stuffing our faces. I didn’t quite mind that anyway as free beer was one of the perks as well. I’m a Phillies fan anyhow so getting to see the Dodgers warm up means the same thing to me as watching the Giants I guess. We finished the grub and headed out towards the warning track in right center field and spent an entire hour watching the Dodgers warm up. It was pretty incredible. They pounded ball after ball right were were standing and I was able to get 2 balls for Ollie. I could tell she couldn’t really comprehend how special it was standing right were we were. Players walking up to us and talking, catching pop ups that were in my reach. I literally had to restrain myself from sticking my hand out over the baracade. She was definitely entranced though and very much enjoying the experience. I think I had to tell her to duck 7 or 8 times. Once practice was over they walked us along the warning track to our seats which were pretty solid. Once in our seats we got to enjoy the game but Ollie’s interest quickly became fixated on the guy with an entire pallet of cotton candy. “Daddy can I have cotton candy? I’ve never had it before.” My immediate internal reaction was, I don’t want my kid eating that shit. Then I realized exactly where I was and what was happening.” Inside my own head I yelled at myself for sounding so stupid. This is her first game ever and I am going to get her anything and everything she asks for. From that point on I was ready to buy the stadium. Now I was no longer fixated on the game rather my eyes continued to follow the cotton candy man as he made his way from section to section. My little girl was getting her first cotton candy at her first game. “Cotton candy here” the guy yelled. And he was loud, you should of heard me. “RIGHT HERE, HEY COTTON CANDY GUY” I was 10 times louder then he was, there was no way I was going to miss him. Boom, I had this colorful pillow of sugar in my hand and Ollie had a smile from ear to ear. “Wow” she said. “It’s so weird, it just melts on your toungue, I love it.” Ahhhhh, success. Operation cotton candy complete.
We watched more of the game then I walked her around the vendor area to give her a taste of the stadium. “Daddy I want one of those.” She pointed to Lou Seal the mascot. Just what I need is another stuffed animal. We have an entire trunk filled with them. What do you think my reaction was? “ABSOLUTELY! Which one the big one or the small one?” ” The small one she said. Wow that was shocking. “And a hat for my sister.” What a thoughtful kid. I was so lucky to have such a great thoughtful little girl. There you had it, a hat and another stuffed animal. Done deal. I was ready to by the $300 blinged out something or other but she got what she wanted and so did I. My first game with Olive, and memory that will last forever. 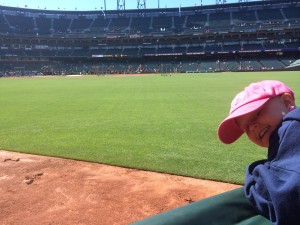 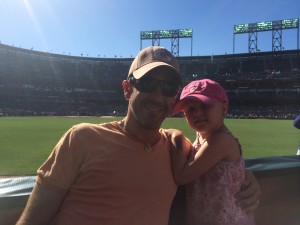 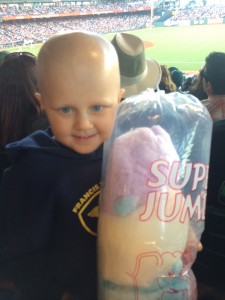 From: Uncategorized
← Top of the Rollercoaster
Cell Block 501- Entry #38 →

Linen Theme by The Theme Foundry