Monday night we found out that Ollie’s red blood cell count was low so I was going to have to bring her into the hospital on Tuesday for a unit of blood. This meant performing the usual juggling act trying to figure out work, who was going to do the hospital trip and rescheduling one of our angels who was going to watch Ollie that day when we finish up at the hospital. We were told if I brought her in at 7:30 in the morning it would be 2-3 hours then we were out of there. Lisa’s mom was going to meet us at the house so that she could watch Ollie the rest of the day while I headed out to work. On Tuesday Ollie and I headed to the hospital and they set up the blood infusion. She sat there and watched the blood slowly make its way from the bag, down the long cord and into her port. I was working on my computer when I heard her yell out to me, ” hey dad, check out my blood glasses.” She had taken the line that was between her port and the blood bag, curled it up in such a way to make the shape of glasses and held it up to her face. It was the funniest damn thing I have seen in a while. 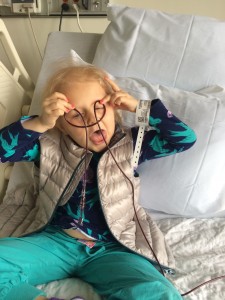 6 hours later we left. So much for 2-3 hours. We had to cancel Lisa’s mom and my work day was no longer a work day. Oh well. We headed home, did the normal late afternoon, diner, then bedtime routine. Megan took her temperature at 10:30 that night and sure enough she had a fever. Megan called the Doctor and she told us to bring her in. We were both sitting on the couch and Megan began to cry. I could see it in her face that she was in so much pain because she just does not want to drag her little girl around like this any more. To top it off, she had just come off an intense work day, didn’t sleep well the night before and was overwhelmed at that very moment. Although I wanted Megan to go to sleep and let me take her in, as a mother she felt that she really needed to be there her first night. Waking up your kid who feels somewhat OK and telling her we need to go back to the hospital is no picnic. She cried and said she just wanted to stay in her own bed. Reassuring her that the upcoming days would be filled with movies in the hospital she began to perk up a little. At 11:00 that night we headed in and the crappy hospital routine starts again. It is now Thursday morning. She has been here since Tuesday night, is scheduled for her Friday Chemo tomorrow and who knows how long they will keep her here there after. We are trying to make the most of it but this shit sucks and it’s still only the beginning. All we can do is take it one day at a time.

From: Uncategorized
← Stuck In Love
Keeping it Real – Entry #23 →

Linen Theme by The Theme Foundry